A Moment of True Human Connection 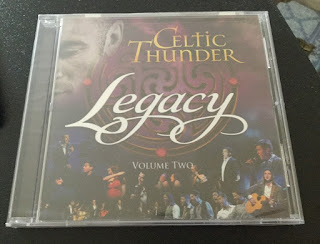 I suffer from anxiety that is, at times, crippling.

Rarely do I choose to leave the apartment anymore. It’s gotten worse in the past year, becoming more of an ongoing thing with me closing myself in, deciding against day trips to Frankenmuth or the chance to see a favorite band in concert (sorry I missed Coldplay but... crowds terrify me) or even a trip to the craft store to see what’s new.

The need to stay within my own walls most often outweighs the need to leave the house, even when I know it’s not good for me to stay in. I even had to fight much harder than usual last month just to get myself to take a long-planned trip to my favorite place on the planet, Walt Disney World. Why?


People who get drunk in places that are supposed to be havens of joy for children (like Disney) and then walk around making scenes, sometimes getting themselves thrown out.


Too many emotions, too many different sets of expectations, just too much input into my Bipolar brain at a time when it is especially sensitive to all things… especially things like sound.


Last Friday came one of those times when I forced myself beyond my comfort zone to face all the waves of humanity coursing through city streets (there was a major league baseball game going on across the street from the venue we were to visit… people e v e r y w h e r e.)


The reason was that we’d had tickets to see Celtic Thunder, one of my all-time favorite musical acts, since early spring and I was determined somehow not to ruin the evening for my husband (and for myself) by backing out of going, though I must have considered doing so a hundred times or more.


I realized it might be my last chance to see Emmet Cahill sing with them; and Emmet is my favorite. Who knows what will happen to his appearances with CT after his solo album and tour launch next spring; he could, in theory, choose to leave the band (as he had already intended to do before) and not return. Not knowing where his solo appearances would be, I wondered if this might not be my last chance to see Emmet sing in person, and I couldn’t let the fear cheat me out of that. I wouldn’t let it, even if I was so scared I couldn’t eat a thing the entire day before going out of the apartment and I was shaking even though I had taken my anxiety medication.


I was in a continual state of near-panic during the trip into the city; I dislike going downtown for any reason, even one as amazing as this. We had great seats just beyond the orchestra pit and I knew it, but first we had to battle through the traffic headed to Comerica Park and manage to get a parking space. Luckily we showed up early enough to secure one in the parking garage for the theater; reserved for patrons of the show that night.


I felt a little bit better.


Then there was forcing myself to descend three levels of staircases (I never take elevators in parking structures in Detroit, not ever) before we even reached the theater. Then there was the waiting to get in, the going through the metal detectors, the whole thing. People crowded in close in the lobby waiting for the venue to open the doors to the auditorium and at one point I thought I might scream or pass out from the sheer closeness of so many human beings to my own body. I kept thinking about the music, the amazing, glorious music that I would hear if I could just make it another one… five… ten minutes.


Once seated, I tried to tune out the steady stream of complaints of the woman behind me and focused on how close we were to the stage. Even with my impaired vision, I should be able to see well enough to actually see the faces of each performer. Great seats, indeed.


I took note of a very tall, broad-shouldered elderly gentleman sitting several rows in front of us. He was talking to those around him, so I didn’t realize at first what I did later; that he was, apparently, at the show on his own.


Once the show began, very little caught my attention beyond being utterly wrapped up in the beauty of the voices blending on the stage before me: Ryan Kelly, Neil Byrne, Damian McGinty, Michael O’Dwyer, and of course, the incomparable Emmet Cahill.


I couldn’t help but take note of one thing besides the music, though, and that was that the elderly gent stood up and gave a rousing ovation at the end of each song.

He tried to encourage those around him to stand up too (though to be honest, I was already forcing my body out of my seat to stand at the end of Emmet’s numbers anyway, only I was behind the man so he couldn’t see me. He didn’t know he wasn’t standing up alone.)


When intermission came, the man came walking up the aisle on my side, and his cheeks were glowing with excitement from the first half of the show, just as mine were. We were both into it, no doubt.


He looked over at me and gave a small smile, and I said to him, “They’re worth standing up for every time, aren’t they?” and his eyes lit up and he said “Yes!”


“If only we could get everybody to stand up too!” he exclaimed… and it was at that moment that he took notice of me leaning against my forearm crutch. He took a step back and shook his head at me and said, “Oh, look at you! Look how sweet you are, standing up like that.”


I didn’t know what to say, so I softly thanked him and then said something like I hoped he’d enjoy the rest of the show. Then he went his way up the aisle and disappeared into the lobby.


It was about that time that I noticed some of the men were returning from the lobby with lovely long, and I mean LONG stemmed roses for their dates of the evening. They were mostly pink roses, (my favorite) and I actually considered going to get one. I let the idea go, though, the lobby was crowded with people trying to get to the bar, and I didn’t want to get caught up in that.


A few moments later I heard a voice behind me. I turned and there was the elderly gentleman. He was holding out a rose in each hand, one pink and one red.

“One of these is for you,” he informed me, “take your pick.”


“Oh, I…” I hesitated. Then I looked into his eyes. It seemed to mean so much to him, how could I say no? I stammered a little before saying that pink was my favorite. I said this even though the poor pink rose looked like it may have seen better days. It was crinkled and brown around the edges of the petals, but then I’m a bit beat up myself, so I suppose I related to the not-so-little rose with a stem half my height (and I’m six feet tall in my boots.) 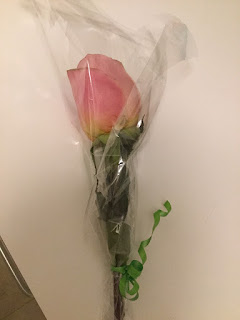 He smiled with joy as I took the flower and thanked him for it again. He said he was going to find someone else to give the red one to, but that I was just “so sweet,” that he “had to bring me a flower.” Then, just before he turned to go, he inquired, “Can I have a hug?”


To be asked for a hug from a stranger might be off-putting to anyone, especially those with serious anxiety issues, but I wasn’t put off by this man. Maybe because it has been almost a year since my father died, and something about the way he enjoyed the show reminded me of how much my Dad used to enjoy watching Celtic Thunder on TV with us.


For whatever reason, I surprised myself as I said “Sure,” and he moved in for a sweet, gentle, not uncomfortable hug. It was brief, and remarkably lacking in awkwardness; I had to wonder if I reminded him of someone he’d known or something, because he was so genuinely warm to me.


He saw me in the crowd: me, with my scars and huge glasses and crutch. And he had no idea that the real damage in me exists on the inside, where people can’t so readily see it.


He went back to his seat and we had no further interaction after that; the second half of the show was over much too fast, it seemed, and then my husband escorted me straight to the exit and out into the parking garage.


Soon we were winding our way in and out of traffic, from the concert and from the ballgame, to get onto the highway and head back toward home. I still held my rose, and when I got home I decided to send a couple of tweets to Emmet Cahill, to let him know about the elderly man in the front of the theater who stood for every song.


Much to my delight, a short time later, I received this in response:

I was surprised, but I shouldn’t have been. I’ve exchanged a couple of FB messages with Mr. Cahill in the past (and even met him briefly in person once a few years back) and he has always been so incredibly gracious. It’s so nice to know that someone with such an unearthly, super-human gift such as his singing voice is, well, really a very nice person.


I bet I’ll always be a fan… of his, of Celtic Thunder’s, and of that sweet elderly gentleman who shared with me a moment of real human kindness. It was about our love for the music, but it was also just a simple moment of truly seeing another human being, and it was a thing of beauty in a world that can be so harsh.


Wherever he went after the show was over, I wish him health, and I wish him well. 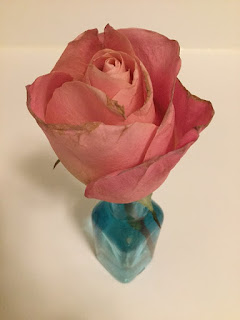 Score one against anxiety and fear… I battled them every step of the way and won a night truly worth remembering. A night of glorious music... and of moments of connection, offline and online, that I won't forget.