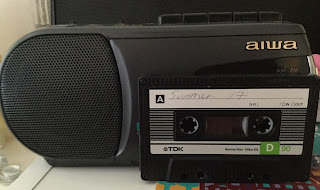 It is compact, fits in my hand, and requires four AA batteries.

It has a single speaker so it’s not stereo. Still, it does the job.

This is a description of the tiny radio/cassette player that my mother gave me some time ago. She wanted me to have it in case of bad weather, so if the power went out I could hear the weather report on the radio.

I had no idea the journey it would take me on when I happened to find two old cassettes in a storage case along with other keepsakes.

One tape was labeled “Summer 17” and the other, “Rainy Day”. Just from the titles I knew what I was in for, but still there were songs on them that surprised me when I listened to the tinny playback through the almost non-existent speaker.

What surprised me even more was how many of the songs on those tapes I still listen to on a regular basis. Thirty years later.

At the time I was writing poetry and endlessly journaling. I was also writing music that if my own child was playing/singing and I heard it coming from their room I would immediately know they needed help.

My own mother turned away from my sisters’ pleading that I needed help for my depression before I hurt myself; saying “If she’s going to do that then there’s nothing I can do to stop her.”

If not for my frequent trips to stay with my oldest sister and her husband at the time, I don’t think I would have gotten through those days. I was so confused.

I had been infatuated (deeply so) with boys in the past but I was in the process of really falling in love for the first time, and I would have my heart broken a year later (long story—short version, he chose another girl. And married her.)

I wish I could go back in time and tell that girl of seventeen that thought if she couldn’t be the prettiest girl in the room that she could damn well starve herself until she was the thinnest, that she was only harming herself. That no number on the scale would make him love her, but that it wasn’t her fault. There were external forces making sure that he didn’t love her (his mother, for one, for reasons she could barely fathom). He found her fun enough to amuse him, and build up his confidence so he could go after the girl of his dreams, which was not her.

I would tell her that knowing that feeling of real love would take a long time to find; but that she’d get there if she just held on. She’d know what it meant to be loved for who she really was, and that would make life somehow more livable.

I’d also warn her that love wouldn’t solve all her troubles, though. I’d warn her that, like love songs, some situations don’t end on a happy note. She’d know frustration and disappointment (and divorce) before the age of thirty. But she’d get through that, too.

Mostly I’d want her to know that she was enough.

Thirty years later, I am still trying to convince myself of that particular truth.

But with the help of music, which has always been there for me throughout my life, and art, and writing, and therapy, and a handful of other things and reasons, I am slowly beginning to do my best to accept it—to accept myself—for who I am. Glaring imperfections and all. Because at the age of forty-seven I have perspective that no seventeen year old can have, even if sometimes inside I still feel like that lost little girl.

I’ve seen too much, know too much now, to believe all the things about life I believed then.

But I’ve learned more than I imagined possible.

Maybe that’s worth the gray hairs on my head, after all.

Love yourself, whether you're seventeen or forty-seven. Because that's where peace of mind begins. It's a difficult thing to do, to learn. But the lessons alone are worth the fight to get there.