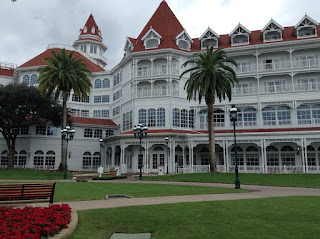 “To all our friends who couldn’t be here, we miss you.”

~My Father, speaking to the camera as I recorded our Walt Disney World vacation in September, 2003 (during which we stayed at the Grand Floridian Resort and Spa, seen pictured above.)

We’ve started transferring family movies from video tape to DVDs, with the end plan of putting them on our computers for back up as well.

I was unprepared for the deep well of emotions that seeing some of these videos would draw on.

I was prepared for the anxiety and discomfort with which I would watch films of my ex-husband holding my daughter as an infant; a marriage I can barely fathom now lasting a day let alone seven years, as it did. I am glad it lasted long enough to produce that beautiful child, now a beautiful young woman, nearly 22 years old and married, herself.

I was prepared for the sadness of seeing my father healthy (even after a brain aneurysm almost took him from us in 2001, he made an amazing recovery from that. It was cancer and related complications of surgery for it that would lead to his decline and another stroke that would take him from us at the very end in late 2015.)

I was unprepared for the sound of his voice, his laughter, his choice of words, so much a part of who he was as a people-driven person; which he became much more so in the later years of his life.

I had written in the past about how I was never close with my father, despite my desperate attempts to get his attention from childhood, until after I gave him his first and only grandchild. A girl, and with dark hair and eyes no less (which he favored, like my mother and sister have) he always said she could have been “made to order.”

After that, he saw me as a person and not just as his third child anymore. He also saw my loyalty as my husband and I stood by his side through his health problems despite my own (he lived with us for two months at one point during his rehabilitation after the aneurysm; we grew even closer during that time) and he was an invaluable confidant and teacher when I was going through my divorce before that; we appreciated each other as humans and saw that we had more in common than we thought.

We shared more than just a love of Disney and Star Wars and music. He also wrote poetry, I found out years later, and he was proud of my writing though he never got to read my novels, he got to read some of my other works and he enjoyed them, which was a gift.

At one point early in his cancer treatment before he was about to get his first trach, he said “I hate for you to have to see this, Sugar. It’s going to be ugly.” I squeezed his ankle, as every other part of him was hooked up to something or other and just stood silently. He said to the nurse who was preparing him for surgery, “This is my third one, the strongest, but with the most tender heart.”

Cancer took so much from my father, at the same time that my genetic connective tissue disease was stealing my eyesight. I was legally blind while he was going through a great deal of his procedures (including the ‘big’ surgery to remove the cancer which cost him the ability to speak and breathe normally; a complete laryngectomy. And he never smoked so they had no idea how he ended up with throat cancer to begin with.)

Until today, when that videotape went into the machine and began to play, it had been more than eight years since I heard my father’s voice.

How can you be prepared for something like that? To see someone you watched waste away before your own eyes on their deathbed in hospice so happy; dancing, whistling, laughing and full of life and love for the people he was with; us.

Then I looked at myself in this video, which was taken fourteen years ago, and I felt the loss of all the physical changes that have happened to me since then, and I mourned myself for a moment, too. That was before blindness, six eye surgeries that were only able to restore some of my sight with disfiguring aphakia glasses; before teeth and facial bone lost to an infection changed the shape of my face forever; when I could wear makeup and eat what I wanted, anything, without worrying about dietary restrictions or the consequences of ignoring them.

I look at my daughter in those films, dancing, singing, happy and smiling… only seven years old and so innocent in many ways of the darkness there is in the world; would that I could have kept her in that bubble and protected her from the driving forces that ended up keeping us apart for almost five years until only recently; when she got in contact with me and said she wanted to be a part of my life again. Each time we talk a piece of my heart is mended, and it is turning into quite a beautiful mosaic piece now, fragmented and cemented back together and all the stronger for it now.

How grateful I am that we had them. Sure, our family had suffered crushing pain and loss before that time but we also had more joy than I was able to process or appreciate at the time (likely due to my then as-yet-undiagnosed Bipolar Disorder.)

How beautiful it is to look back on those days, even with tears streaming down my face, and hear the sounds and see the sights and know that whatever imperfections our relationships had, that as time went on love was always the thing that mattered the most.

Love is all that matters, folks. I’m telling you. If you’re living in an age of innocence of your own right now, please do not take it for granted. Document it, save it any way you possibly can. Hold on to those days when the darker ones come, because those memories can see you through an awful lot and I am living proof.

I am still climbing my way out slowly from a very dark pit of depression that has lasted since last fall (or before, depending on who you ask…) but today I am grateful for memories, for the times that were, and hoping that somehow there will be more memories to be made, still, in my life despite all the challenges I face and the battles I fight.

I’m hoping for a return to innocence, and a lessening of the ferocity of the memories of times that came after it; because it is so much better to remember my father the way he truly was when he was himself than the way that he was at the very end of his days.

Fight for the innocence, hold on to it, for as long as you possibly can. In this world, we need love and good memories more than ever before because they sustain us in the fights we must undertake to carry on the business of living.

I’m wishing you all many happy memories, especially those still to come. Who can know what lies ahead of us? Today I choose to hope that there will be more good times in among the bad than I can imagine in this moment.