A Writer's Tale (OR:That Time I Put My Soul Into a Sad, Sweet Little Book and (Almost) No One Noticed) 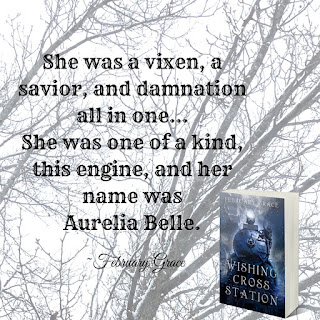 (First a note: To all who have read and commented on/reviewed WISHING CROSS STATION to date, you have my heart and my gratitude. Thank you. xoxo)

Now, as many such stories start, so begins this one:

Once upon a time, I poured my heart and soul into a little book that I was totally obsessed with.

It was a story about love and loss and trains and time travel, and I researched all the things and I had an amazing editor and proofreader and cover designer and publishing team – my dream team.

We released the little book out into the world and a sad thing happened: it didn’t truly find its audience.

Well, at least it hasn’t yet.

It was released in the summertime (earlier than planned because the book is actually set near Christmas) and maybe that did something to throw readers off. I don’t know.

Maybe the fact that the book was described first as ‘dark’ then as ‘bittersweet’ (I was actually told it wasn’t ‘dark enough’ in the view of some to be called ‘dark’ so we dropped the word from the description.)

The truth is that it’s a sad little book in the end. But that hasn’t stopped many a book before it from finding its audience; an audience that doesn’t mind ending a book with a good cry, and can even see the value in reading such a book from time to time. An audience that revels in the beauty of an imperfect love story.

I’m lucky, though. There have been those who’ve read it and found in it what I hoped they would; an escape from reality for a little while, and something, a character, a scene, a moment, that stayed with them.

Others picked the book up from Netgalley not really interested in the subject matter, but because they liked the cover, and sadly seemed disappointed when the book wasn’t what they imagined it’d be.

I’ve tried putting this book into KDP Select (for those who are not writers out there, that’s an exclusive to Amazon deal where you get to offer the book for a discounted price or for free for up to five days out of every 90. I’ve chosen the free option; twice so far.) I’ve tried talking about it, not talking about it, hoping others would talk about it instead so it didn’t feel like I was constantly selling, and then finally resolving in my heart that it may take a long time for this little book to find more of its audience.

Then there’s the scary realization that maybe it never will.

What does a writer do when they have put their all into a book and the world at large doesn’t notice?

They hold on to hope. They don’t give up on the little book they love, that’s for sure. They keep it out there, somewhere in the periphery at least of what they do online; without pushing it into people’s faces. They link it to their profiles, they show off the (gorgeous) cover whenever they can.

They remember their hero, Keigan, and how he struggles mightily to find his place in a world he is so out of place in.

After analyzing it long and hard, I don’t think the reason it hasn’t been noticed is it’s because what I wrote is bad. I’ve had enough feedback from people who know a thing or two about books and writing on this one to know that it, like GODSPEED, precisely hits the marks I was aiming for as a writer when I wrote it.

With the help of those people, this little book is the best that it can possibly be. I had the best possible editor, proofreader, cover artist, book manager, and publisher I could have asked for on this project because they let it be what it was. They enhanced it, they strengthened it, tightened it up and polished it like a gem, but above all they let Keigan’s voice, my voice as he told his story to me, come through, and I will forever be grateful for that.

I’m wondering just what it takes anymore for a little book to spark and catch fire, in the big, wet world of soggy paper that it finds itself in the middle of. Volume after volume dropped on top of the pile day by day, supply far exceeding demand, muffling its little, modest voice and preventing people from knowing it is out there.

So I’m just here to say, my little book is out there, waiting for the right readers to find it.

It’s called WISHING CROSS STATION, and you can read the first chapter in its entirety here. You can read even more of it using Amazon’s “Look Inside” feature.

It’s my hope that maybe you will consider reading those samples, especially if you’re a hopeless romantic who doesn’t always have to have a shiny happy ending to a story to feel the depth of the love between the characters in it.

Not everyone in life gets a happy ending. That is a fact a lot of readers read romance novels to escape, and that’s why it shouldn’t be viewed as a romance in the traditional sense.

Love, however, is still the biggest message WISHING CROSS STATION speaks to. That whatever the outcome, loving someone, for one pure moment in time, is worth it; because it can change not only who you are but where you’re going and how you live the rest of your life.

Love’s power to transform is a lot more important to the story than the time travel or any other element of the story. It is the story.

In the end, love is the most powerful force of all, even if it cannot always conquer all.

Here’s a link should you be inclined to give it a look over.

It’s just waiting to sweep you away.

Step aboard the Aurelia Belle and take a journey you won’t soon forget.

My little book is out there, still setting off sparks in the big, wide world.

And I’m still here, hoping one of them will catch.

Once more before I go I must thank everyone who has read, commented on, and reviewed WISHING CROSS STATION. I am so grateful to you, one and all, and always will be. Thank you again.

~bru
Posted by February Grace at 8:57 AM