Is There Anyone Out There? (You Bet There Is.)


Yesterday I did something I do every once in a while, though it makes my eyes ache and takes a good chunk of time.

I went through my Twitter following/followers lists and really looked at the people who are on them.

Wow, I am lucky to have met some quality people in my time on Twitter.

Even with the imposed brevity of the posts (which more often I see people using pictures to get around, and yeah I’ve done it a couple of times, but I digress) we’ve gotten to know a bit about each other.

I’ve learned enough to know that a lot of the people who follow me are not only fellow introverts but (no matter whether intro/extroverted) they love books and musicals and Disney and Star Wars and Star Trek and Doctor Who and cats and dogs and tons of other interests we have in common.

This is why I don’t automate my interactions on Twitter: because there are people out there behind every username and I prefer to interact with them as such.

But I do know that the people out there now are listening, and it’s often the simplest moments that bring the biggest smiles or feeling of comfort into my space, which is something (space that is, especially mental real estate) difficult for an introvert to share.

Where people get into trouble on social media in my view is when they forget there are people behind every username. Even businesses have someone tweeting for them, even if it’s only to schedule tweets (another thing I don’t do. If I’m on Twitter, I’m on Twitter.) so at some point most likely a human being is going to set eyes on the things that you post, share, and say.

That is always at the forefront of my thoughts, when I post here, when I post elsewhere on social. People’s eyes will see and their hearts will, in some cases, take in what I say.

That’s the power we all have, and the responsibility.

How much better is it to build each other up than to tear down? How much better to share happiness when others succeed instead of being jealous, or to share their sorrow when something bad happens, letting them know they’re not out in the great big world alone?

I just wanted to say that I’m thinking about what I put out there into the world today.

I’m thinking of the repercussions, of the feelings that having interacted with me will bring about in people.

I hope that such exchanges will make them smile, or think, or maybe even feel the sting of emotion in their throat when I am having a rough time or sharing something that’s sad.

We're stronger when we look out for each other. Celebrate the victories. Mourn the losses. Feel something for your fellow beings that serves them, not only yourself.

We’re all in this world together, but sometimes it can be a lonely place.

If one person feels noticed, validated, or heard through my participation in social media, then it makes it all worth it in the end.

Remember this: it’s not all about blasting people with your message, be it selling something, politics, or any other sort of soapbox speech.

Let’s get to know a little about each other, and we’ll both be richer, I hope, for the interaction. I want to hear how your day is going, I really care.
My day? So far, it's good. I took a silly picture of myself in makeshift Mickey Mouse ears and posted it to FB and Twitter to raise money for the Make A Wish organization. (You can do the same using the #ShareYourEars hashtag. For every post Disney will give 5 dollars, up to 1 million, to granting wishes.) 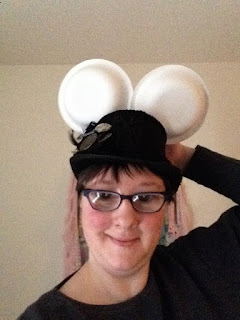 So, tell me, folks. What’s new with you?