I wondered on Twitter what I should possibly blog about after all this time, and a reply from Henrietta M Ross came: “What you’ve been up to…?”

So here it is, everybody.

The short version in case you want to skip the rest: I marked the second anniversary of my Father’s passing at the end of October. Followed medical advice and forced myself (and it was HARD) not to participate in NaNoWriMo last month. (Thanks to all the friends who encouraged me to put my health first.) Took a solo trip for 4 nights/days to Walt Disney World, overcoming many physical and mental challenges to do so. It was a victory, and not a small one, either.

The longer version…I can’t believe my Dad has been gone for two years. Of course his quality of life had become so bad in the ending months/few years of his life that it was hardly like having him really here. He was suffering. Knowing that, I wouldn’t bring him back if I could to suffer more; I am glad he is at peace. We just miss him so much.

Now, on to “No NaNo for bru”. My medical team has observed repeatedly that writing novels the way that I do—the way that I MUST, the only way I can, makes me go into a manic state that is difficult to get back from. Knowing this they advised me not to participate in NaNoWriMo. And I knew they were right because if I had I would have done what I always do: written 50K words in a week or less and ended up manic as all get out during and afterward. And especially since I have been going through a serious, difficult med switch (discontinuing one long time med and starting to try a new one) I was/am having enough trouble controlling my mood already; I didn’t need to add mania to that. Neither did I need to get manic knowing that I had a trip coming up mid-month; a trip I was originally not meant to make alone but because of circumstances (and a very generous husband) I ended up taking on my own in the end.

The trip was about as magical as Disney trips can get. I was treated like a celebrity at my favorite WDW resort, where we have stayed several times and where I am friendly with quite a few of the Cast Members. They sprinkled all the extra Pixie Dust on my trip that they could; from giving me ‘magic’ FastPasses the last two days of my trip to making sure I had everything I needed and keeping an eye on me since I was traveling alone; I can’t say enough about staying Club Level at a Disney resort. It is an experience that (thanks to discounts) I have been able to experience more than once and if you ever get the chance to save up for it, it’s totally worth it.

First thing I did after I arrived and checked my luggage in at the hotel: Headed to Hollywood Studios to cross my number one thing off my wish list… 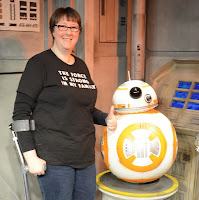 Later in the trip I crossed off the next thing, going to the Bon Voyage Adventure Breakfast (which was so fun I was lucky that I got to do it twice!)

Other highlights included seeing Elsa light up the castle with Christmas Frozen magic, and meals that were so amazing that they qualified as an attraction all on their own. Also, great character interactions including the best visit with Mickey I’ve ever had (and I’ve had many…) 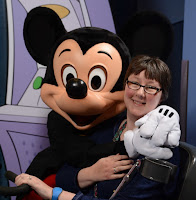 The travel was hard on my body, as it always is, and by the time I got home I was exhausted and swollen beyond belief all over. I couldn’t see my ankles, even my hands swelled up. It took two solid days of sleep and elevating my legs to begin to see improvement and has taken weeks to resolve almost completely. This is the price I pay when I push my body at all; even with the use of a scooter in the parks and saving myself steps where I could, even just getting through TSA at the airport is a production with me.

But I was lucky, and had mostly patient and kind people around me, people who offered to put my bag into the overhead bin for me and get it down afterward while the flight attendant returned my crutch to me (they store it in the closet during flight, it usually won’t fit in the bins.) Kudos to Delta for about as pleasant a flight experience both coming and going as you can get these days. And my gratitude to kind strangers.

When I got home, after I finally woke up and got over the worst physical pain left over from the trip was when the bottom dropped out of my mood. I don’t know if it was the one med leaving my system after being steadily fed to it for about six years or if it was just inevitable post trip blues, but I was crying over everything for a while there. TV commercials, songs, you name it, it made me cry. Then I started laughing more too and realized that my feelings are thawing out after feeling zombie-fied for a long time on the med cocktail I was on for such a long time and I think that’s a good thing.

Even though it hurts sometimes to feel everything so intensely I’ll take it over feeling nothing at all. Especially for an INFJ it’s horrible not to be able to feel your feelings properly, since they are so much a part of everything you do.

My mood has been greatly helped lately by the ability I now have to celebrate Christmas (long distance) with my daughter once again. The other day she texted me while she was putting up her tree and lights and sent me photo after photo… and I cried happy tears because for so long, I didn’t know if we would ever be able to share times like that together again. We miss each other and I wish we could be together for Christmas, but I hope that sometime next year I will finally get to put my arms around her and hug her tight again.

Christmas shopping is about wrapped up no pun intended (online shopping, a must…) just one package to ship this coming weekend out to my daughter and then I think we’re set.

So I will leave you with this… I have been absolutely living inside Tom Chaplin’s new album Twelve Tales of Christmas. It’s like swirling inside a beautiful auditory snowglobe. A few classics but mostly new songs. And it’s what is playing, on a loop, in my home this holiday season. Check out Youtube for a taste of some of the songs, I highly recommend it. It’s bittersweet and wonderful and pretty… all the things that the holiday season is for so many of us. Whether it’s due to empty chairs at the table because of those we’ve lost or those who are far from us that we wish were close by… or any other reason you may be struggling with the holidays, I hear you.

Remember you’re not alone and just do whatever healthy things you can do to cope with it all until it’s behind us.

I hope that you can make some memories worth holding on to this season, find beauty where it hides in the ugliness of the everyday world… and above all if you have a chance to be kind to someone, do it. Give, share, and be a light that someone else might desperately need to remind them that there is still good in the world. Even if all you can do is offer a kind word to one person a day, how much better the world would be if we all did that, eh?

Anyway… that’s what I have and have not been up to. Thanks for listening.

I’m wishing you and yours a good, safe and memorable holiday season…